So, there's a community on Flickr (and I've been paying attention to community, in part becuase

evilrooster has sensitised me to the idea of building online community, and I'm looking at how different places/people do it.

I think this one has a bad model (which seems to be a non-unique model). One is supposed to comment on "x" number of photos prior to whatever photo you post to the group. I think, on watching how it works in practice. The problem is the comments aren't freely given, they are a quid pro quo. One of the reasons I think it's a failing model is the complaints people have about not geting the comments they are entitled to.

In this group the comment is a simple score. I happen to think so bare-bones a response is less than useful (is the score because of a personal preference, or does it reflect a school of criticism?, that's just the start of the problem).

So I add critique, detailing what did/didn't work for me.

Which led to this exchange:

Me: The moody effect works for me, but the light is murky in the details of the ring, I have to work to see the intricacies of it, which steals from the impact.

Ignoring the assumption about my monitor (s'he doesn't know how I've calibrated it) we have a couple of problems.

One, most people do have monitors which are gamma 1.8. Which means, should s/he want them to be in their best light... better to set the image to the norm, than to bitch if it fails to be viewed that way.

That's a collaboration. I make a poem, a photo, a sketch. If I want to share it with the world, I can (and it's so much easier now). The viewer brings all of the predjudices, training, understandings and experience s/he has. That colors how the image is seen, the poem is heard, the song enjoyed.

What they think about a piece can't be wrong. It may be ill-informed. It may be done without reflection, consideration or understanding, but it's not wrong.

And telling them it's wrong... is wrong.


Am I trepidatious when I put a piece up for examination? You bet. Rejection sucks. Detailed critique is painful. Expert critique can feel as if one is being flayed alive.

But if one puts it up, one has to take the criticisms at face value.

I'll close with some cuteness. 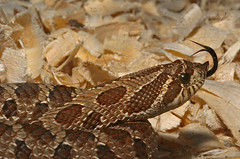 Based on what I was talking about in the last post, I've gone and started a group on flickr for Critique, as a practical matter

The icon is from a shot of a glass-blower, a hot glob of nothing, which gets blown, and forced, into a shape of use, or art.
Collapse