I made a stupid mistake today.

No, I made two, one exacerbated the other.

The second, I trusted the damned LED screen on the back of my camera, which made the underexposure of the images I was taking less apparent.

So, why did I underexpose them?

Because I forgot that snow is white.

This is what I wanted the pictures to look like. 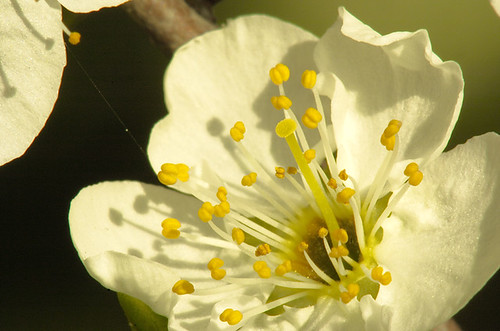 This is what I actually shot 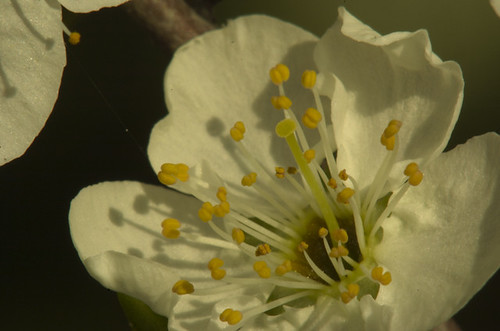 Why the difference? Because the flowers are white.

The meter in a camera is really simple (no matter that modern meters are really sophisticated), it's trying to make the entire image fall into a range the recording medium (be it sensor, or film) can record. Really bright subject, or really dark, will fool it.

A really bright subject (like the plum blossom) will be dulled, because that's the way dealing with all that bright stuff, is handled. I was fooled by my eyes (which are more sensitive than film, mostly because the diaphragm of the eye is able to adjust to subsections of the scene), and thought the amount of background (the image is uncropped) was enough to balance out the white of the flowers.

Happily, this is not as big a problem with digital cameras as it is with color film (black and white film is more forgiving of this sort of mistake than color, because the paper stocks have more variation than color paper does, but I digress), and shooting RAW makes a huge difference.

My primaring editing program (LightZone) has some handy tools, which allow me (some) to correct for this sort of mistake, at which point all I have to do is treat it as if I'd not played the fool. Some of the shadow detail is lost, but this image doesn't have a whole lot of detail in the shadows, so I got away with it.

That Icon is sort of about this picture. 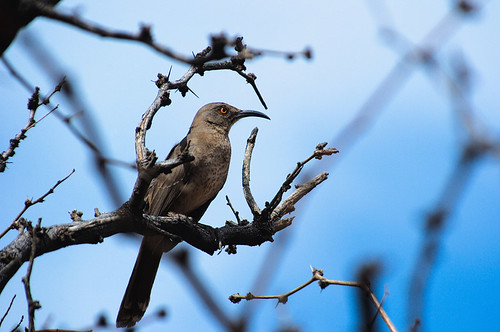 Most of you have probably seen it before, I put it up when [former SFWA VP Howard Hendrix] called people who gave things, they had created, away on the internet, "Pixel-Stained Techno-Peasants."

But I didn't know what kind of bird it was. Last week I bought a book on the remainder table at a local bookshop (Seasons in the Desert a naturalist's notebook by Susan J. Tweit). It's a collection of essays on various of the plant and animals, with illustrative sketches.

One of the essays was on The Curvebilled Thrasher. The picture is sort of drab, but the description made me sit up and say, "I know that bird!"

Color: Buff gray all over, with white throat and darker mottling on breast; bird's eye startling bright yellow or orange

That last line was what gave it away, because the eyes are stunning.

How does that relate to the Icon (and props to

liminalia for making it, and the other shot of the bee's butt, which I used in the last post)?

Because they are similar stories. I was heading to the Library in Sierra Vista, about a year ago this time, and I was shooting some shots of cactus, as I walked through the desert. I looked up and saw the bird.

At which point I starte to stalk him. A slow approach, keeping the sun behind me, and maneuvering to where I could get a pleasant pattern of the brances (because there was no way to get all of the branches out of the foreground.

With insects in flowers, I tend to be shooting the flowers, when they show up, and with the same sort of change in focus, I try to keep them in the frame, and guess where the focal plane is going to be when they leave the flower. Bees are about as easy at it gets, because they tend to float in front of the flower for a moment. Hover bees are a little harder. Someday I'll manage to get one of them I really like.