So, last Friday I was pruning the grapes. This does a few things, the most dramatic is encourage bud break. Less dramatic, but more important, to me, it directs the way the plant grows. I can take off dead wood (and so reduce the odds of rot), and keep the shape looking as I like it.

They are, in effect, giant bonsai.

So I was looking at the Tokay, and say some dead wood, ragged and old. It wasn't anyplace I recalled dead wood, but I might not have noticed. When I reached for it, to think about getting the ball-cutter and ripping it out, I realised that it was strange piece of wood.

It wasn't, you see, in need of removal, it was hanging from some threads, about 3/64's of an inch from the wood. It was a chrysalis. What with drill, and other things yesterday (potting up the blueberry, the wisteria, shooting some plum blossoms, consolidating the worm farm etc.) I missed the good light.

This morning I got delayed (taking the trash to the street). When I got there, I was too late, and this is what I saw, instead of a chrysalis waiting to open: 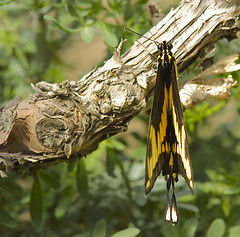 So I ran in, grabbed the 200mm Macro, slapped the 2X teleconverter onto in, snagged the tripod and went to work.

Happily she was taking her time in pumping her wings, so I was able to get things like this: 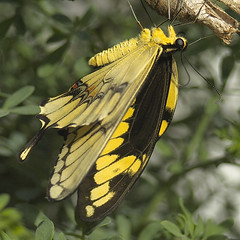 The lens combination made it possible to get really detailed images, without having to get so close she was really scared, or the lens was shading the subject. 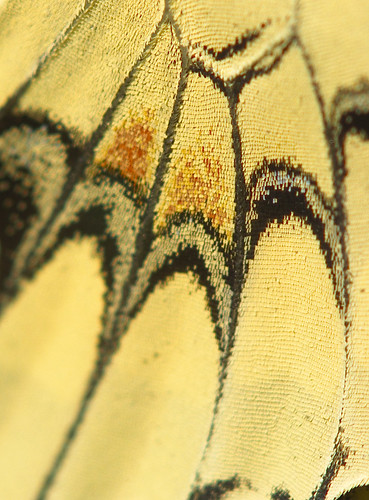 If you click through, the full size image has a lot of detail.

I'm really glad it was on a grape (and I can only hope I have as much luck when the praying mantis egg-case, on the same grape, hatches), because I was able to spin it, to keep the decent light on her.

Was, as Lindsay nails it ultimately, the victim of hubris.

As someone who has made a big deal about reform, who has campaigned as a moralist, this shit is stupid, almost beyond words.

Given the enemies he's made, he was foolish to think he could keep this below the radar (and in an election year... WTF, has he no political sense?). Should he resign over it? I don't know. I'm not in NY, and don't have a feel for the actual magnitude of the offense. From the outside, given his track record as a prosecutor, and his recent efforts to increase the punishment for johns; to say nothing of simple consistency, I think he needs to resign, and face the music. Mind you, if he should stay, I don't have a real problem with that either. What I'd really like to see is some consitency on the part of all those people who were up in arms about the attempts to make a structuring charge against Limbaugh protesting the attempts to frame such a charge against Spitzer.

I'd also like to see all the people who've been defending Vitter, step up and defend Spitzer. The folks who've been ignoring Vitter, can help themselves to a steaming mug of shut-up. If they want to try and explain why Vitter's actions are somehow different (in a legal sense) from Spitzer's, well that's some sophistry I'd like to see.

But I'd really like to see how it is anyone can howl for the head of Spitzer when what he did was venal, but not really a threat to the office. His jeopardy is more from it being illegal (because of the potential for someone who wasn't looking to get him put out of office) to blackmail him for favors.


There are a lot of things I wonder about. Why were the feds looking at this prostitution. It's not a crime they care about much. Wiretaps are expensive. Legal ones even more so. They take warrants, personell to man, equipment, and people to go over the tapes.

It's a nice piece of luck for someone that Spitzer just happened to be using the service they were tapping.

The conspiracy minded might say it looks too convenient.

Jane Hamsher, and some of the other folks at Firedoglake, which includes a former prosecutor in the US Atty's office, have more, questions about the details. There are also some interesting speculations about the why of this, and just what purpose the charges have.

Paul Campos (of the Rocky Mountain News) want's to know if Spitzer was targetted becuase it seems the bank reported him to the IRS who reported him to the FBI. One would think Spitzer, as someone who did that sort of prosecuting would either have avoided the problem altogether, or had a better idea how to hide the trail.

The argument that the money looked suspicious, on its face, is somewhat farcial. Spitzer has a lot of money, these were large sums for most of us (I can't really imagine spending $5,000 grand on date, even if I knew I was gauranteed to get lucky at the end of the evening. I'd be buying a new camera, or car, perhaps a horse. Not a night on the town), but for him they aren't all that big a deal.

So Spitzer was stupid, but everyone who is manning the barricades and yelling for his ouster, who isn't also screaming for similar accountability for far worse crimes; crimes against the people, not just a dipping into the sordid stories of personal weakness on matters earthy, is, at best, deluded about what really matters, at worst a cynical ass; looking to consolidate power, or (most likely) just a run of the mill hypocrite who doesn't care about keeping one set of rules for friends, and another one for opponents.