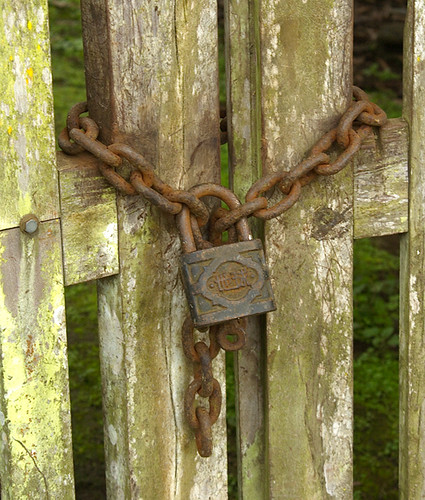 We were walking back from a trip up to the lava tubes in the highlands of Santa Cruz. We took a cab up, and walked back.

It's an exercise in how the camera can lie. What does the entire gate look like? What's the gate protecting? Ignoring the, apparent, condition of the wood (which is at a moderate premium on the islands) how secure is the area behind the gate?

The answers are: the gate is low (not quite four feet, as I recall), what's behind it is a yard, with some children's toys. Just down the way was an entrance to the yard, with no gate.

But it's still a nice photograph. I particularly like the way the wear from the chain is apparent

So, doing research on pancakes I decided to make a "baked pancake". 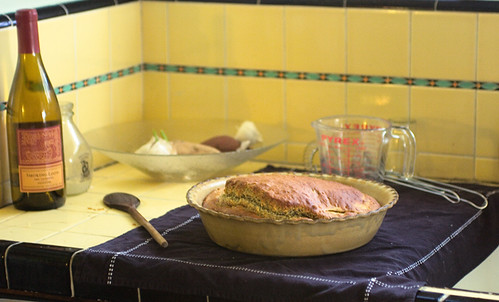 Mostly it's a way to save effort, because it's not a time saver (and for a small enough one, as I made yesterday, it's a net loss on time). 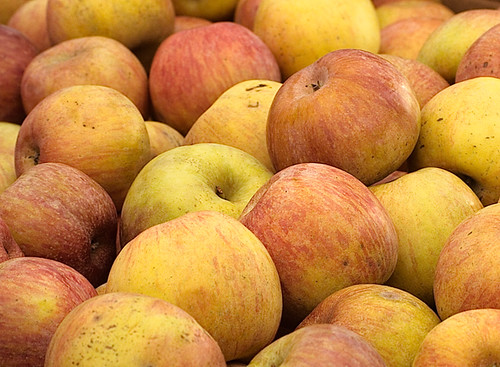 First, we bought some apples at the Pasadena Farmer's Market

Short story: Make a batch of batter, pour it into a pan, bake at 350F until done (between 30-50 minutes, depending on the size of the pan).

So you don't have to spend time flipping them in the pan.

On the other hand, that's a pretty boring thing to be eating. Pancakes, by themselves, aren't the most exciting of foods.

So you play with it. I took some apples, and sautéed them in butter, with a bit of cinnamon, until the crisp was just gone. When that was done, I layered them into a pie pan (a large one, 13" across, or so).

Then I added a bunch of poppy seeds to the dry ingredients, then I added some honey to the mix (because I don't want to have the cake be so dry, and unsweet, that it has to be drowned in some outside agent, much as I like molasses, maple syrup and sorghum).

I love poppy seeds. I love the way they taste, the way the crunch and the way a large quanity of them, as in a palacsinta (an Hungarian dessert cr&ecirconpe), yields, and resists the tooth. Back when I was commuting regularly I used to keep a jar in the car to bite down on when I was stuck in traffic). A couple of years ago I bought a half lb. of them. Maia mocked me. Then I started cooking with them.

Pour the batter over the apples (use more, of whatever you have on the bottom, than you think you need), pop them into a preheated oven, and bake. 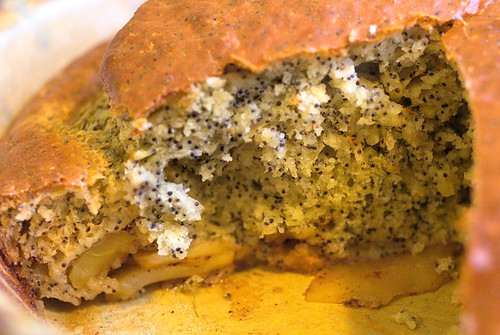 If you look at the base, you can see where the apples weren't sufficient to balance out the cake itself. It looked fine when the batter was poured in, but the rise completely overwhelmed the fruit. 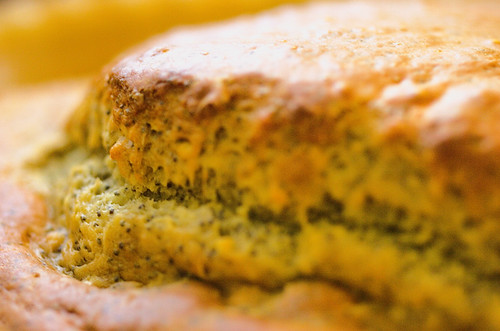 They rise much higher than one expects.

I did one yesterday, with bannanas and cinnamon. I thought I'd sliced enough bannanas. I was wrong, they reduced more in the oven. On the other hand, I used a small cast iron skilled to to the baking (cook the inclusion, and then just pour the batter over it. This has the advantage, if you have the timing right [or a partner] of using the heat in the pan to start the intial spring of heat from the double-acting baking-powder).

Apples: Peel and core some apples; slice into wedges. In a skillet drop a pat of butter, when it's melted add the apples. Season to taste (cinnamon, but tarragon wouldn't be bad, also nutmeg, allspice or cardamom. Depends on what you want).

Add poppyseed to the dry ingredients of a standard pancake recipe.

To the wet ingredients, add an extra egg and some honey (to give a bit more color, and moisten the crumb). Mix well (more thoroughly than you normally would. In the first place, the batter won't sit, so the dry ingredients won't have time to wet as completely as they do by the end stages of flipping pancakes, and the in the second case you want a finer crumb for this, it's more cakelike than flapjacks).

While the batter is resting, layer the apples in the bottom of a pie plate. You can reserve some of them to make a layer in the middle of the cake as well, if so use another apple.

For the bannanas. Slice some bananna. In skillet heat some butter. When the banannas are starting to soften, add a splash of calvados. Layer the banannas into the pie pan, and dust with cinnamon. As with the apples, if you want to make the

Baking
Pour the batter over the fruit, and place into a 350F oven until done (this will depend on the pan, the oven and the size. Much more than enough to make about 2 dz 4" pancakes is probably too much). Not less than 30 minutes, nor more than an hour. Test with a toothpick, or skewer; when it comes out clean, the beast is done.


Serving Let it rest for 10-15 minutes, cut into wedges. Dress with butter, powdered sugar, jams, or syrups to taste.