Photography is a little like haiku. It can be done quickly, by anyone, and the basic rules are simple.

A good example of either is easy for the reader/viewer to get the gist of, it has an immediate emotional effect on the audience; the appreciation of it will profit, and change from reexaminations.

Both of them, for me, tend to stem from transitory flashes of inspiration. I’ll dash of a haiku, trying, in the spare form of the haiku to capture, and share, the essence of the moment.

Then I’ll look at it, and notice that it’s missing something, so I’ll shuffle it around; look for a better “break’ (that moment of shift, where the direction/subject of the poem is illuminated by a sudden change in focus; as if one has stepped to one side and looked at it again. It tends to take the prosaic nature of the subject and make it more alive and reflective. Issa was very good at this.)

If I’m planning a photo (and to some degree I plan all photos, even grab and snapshots. It may be as simple as moving to where the background is less distracting, or using the focal length of the lens to isolate the subject, but I never just pick the camera up; put the subject in the center of the frame and pop the shutter) 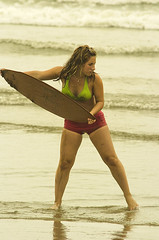 In this shot (which is slightly flawed; her fingertips are clipped at the left edge of the frame) I saw her getting ready to skim the board, and tightened up to get just her in the frame. I was a trifle off in how much room I needed.

Some photos have more of this than others 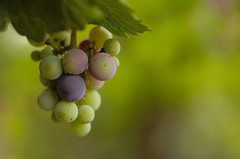 This one took about eight weeks. I saw the cluster set, when it was little balls the size of roundheaded pins I thought they’d make a good photo. I spent the weeks while they matured moving the half barrel around, checking the light; seeing the qualities of it at different times of day (angle, color; the effect of clouds). Ansel Adams used to do this in Yosemite. He’d hike the same trail, several times, and take notes; project the movement of the sun, and the angle of the light, so that when he finally took his camera (and 12 plates of film) out to expose the image, he was going to get what he wanted.

When the were the size, and colors, I wanted I set up the tripod, selected a lens arrangement, moved the barrel about and then spent about 40 minutes taking pictures, differing the exposures, the f-stop (for DoF and bokeh, trusting that; within the range I was working, I’d get, if not the shot I wanted, enough extra information to go back the next day and do it again (my greatest worry was that the actual quality of the light wouldn’t be quite right, and I’d have to set up a couple of hours earlier, or later, to get the angle I needed to get the color (and saturation) I wanted.

Sometimes one inspires the other.

Earlier this week I took some photos here at Cp. Roberts. Today in class I dashed off a haiku (I was trying to stay awake, and taking notes wasn’t useful).

The oaks stand impassive
above the burning grass

It’s a decent sort of haiku (and before anyone tells me the syllable count is wrong, I decided a long time ago that the 5,7,5 meter doesn’t work for me. English isn’t Japanese and the densities of information are different. I have worked to get the essentials of the form, without shoehorning myself into a meter which I end up making very stilted poetry in. If you want to argue there is no seasonal referent.... maybe, but I think the burning grass is evocative of the time of year).

Even though it’s decent, it seems a trifle static to me, the scene isn’t really set.

So I started to play with it. The photo itself (which caused me to think of writing an haiku) is a step removed from the event. It wasn’t much more than an aide memoire of the actual fire. There is no smell of smoke, the burn line is frozen, I wanted to catch the sense of motion and speed. 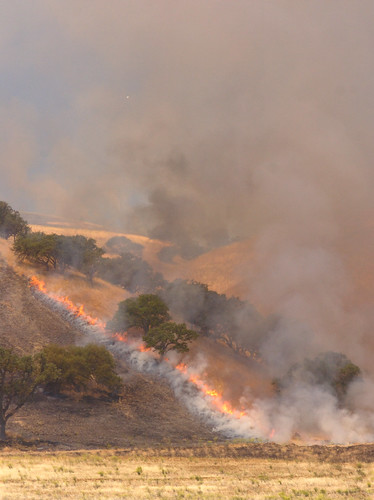 The rabbits run
The oaks stand
The grass burns.