Maia and I went to a "Grand Prix" event at a local (Woodside) horse park (Bayfest Grand Prix). It was a good event. The entire thing is three weekends, (I don't know if there are events in the mid-weeks). So there is a vaguely fair-like atmosphere.

Horse events are strange things. An odd mix of the snooty, and the egalitarian. The guy who won the event we saw, also won the first weeks running of that style, and is the presumptive favorite for next year. He's really good. (I think they said he rode in the Athens Games, but it might have been someone else) So he gets an ex extra $5,000 in prize money for doubling. Should he win next week that will become $20,000 extra. So he has the potential to win something like $45,000. Which isn't bad, because he's on borrowed horses. (n.b. The cost of competing is such that the prize money is; for someone like him, an offset of expenses, even on a borrowed mount).

Which is something a good breeder wants to do (lend horses for a show like this) because it generates more business.

But sports are tricky to shoot. So much is completely out of your hands a a photographer. Light, timing, background; all the things one wants to be able to completely manage... not gonna happen.

You have to know the sport. They all have their quirks. You have to get the lay of the land (if you like grand prix motorcycle racing, finding a good spot on the course to get action is imperative. Parking yourself on the straightaway is going to provide you with dull images).

You have to adjust for light. The best angles for the event we were at, will never be good photos, because they are facing west, and the start of the event is after the sun has gotten low enough that flare is a huge issue at that angle.

So, for this sport (grand prix jumping) the "critical moment" (and a moment of appreciation to Cartier-Bresson) is the jump. There are parts to the jump. The approach (boring, mostly, to the photographer... though a Muybridge series (which was done at Stanford, just a few miles from where I'm sitting. Learn something new every day) is interesting to the serious afficianado, and very interesting to the rider/trainer.

Even that (a horse on the ground) can be interesting. It's how you set yourself up which makes the difference. 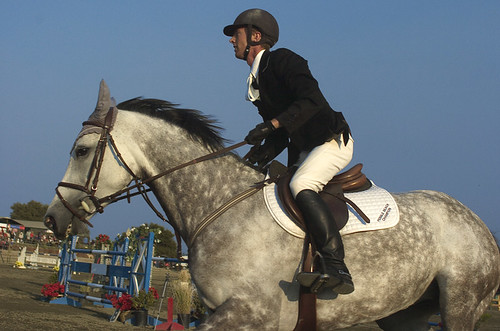 That's not the best shot. It's from the horse/rider coming off the final jump. I was crowded, and pressed for time. The light is flattish and the composition is, largely, imposed (from zoomed out, to wider, and focus and grab the short... it's a lot to do in a second or two). 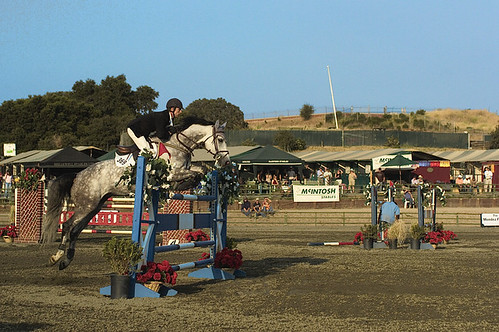 There is drama there. The tension, the sense of imminent separation, and the raw power of someting so large as a horse about to fling itself into the air. One has a bit more control. Finding a good line, and choosing the lens. Focus and stop can be set up. The rider has to choose a line from a limited set of choices. If you don't want to shoot more than one jump in each riders run, it's almost trivial to get consistent shots. 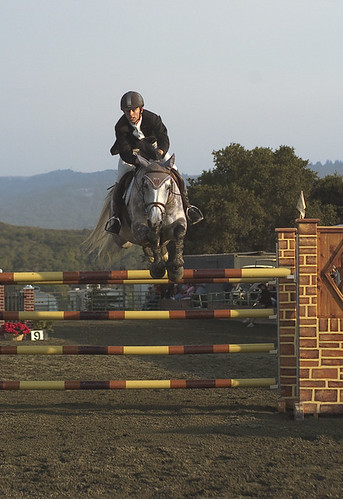 Probably the trickiest part of a jump. Get the angle right, and it works. The horse/rider are just suspended. Get it wrong, and it looks faked. A rocking horse, with no energy.

Again, the light here is flat. I'll go back and punch up the contrast/saturation if I decide to ptint it (or use a warm tone paper, or something). 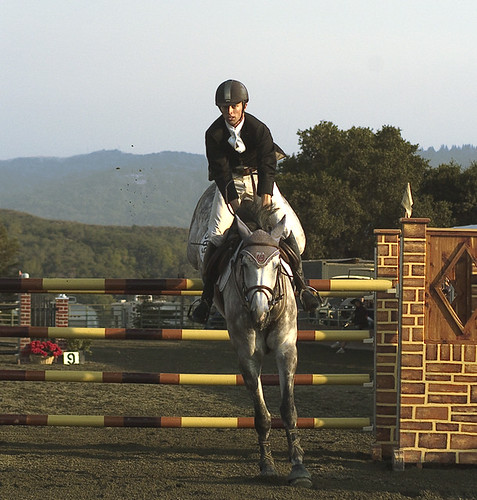 This has the greatest variation. All the energy spent in getting up, gets taken back in getting down. The smallest bit of luck with timing is the difference between the shot above... sort of static, and the shot below. 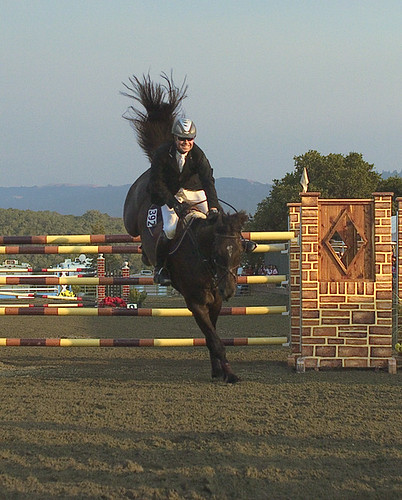 That's the winner, on his Jump Off round, clearing the last fence. A split second later, and there would be less motion; but more dirt. Earlier, and the tail would have been more down (as in the shot of the grey) and less arc of back.

The one thing I did miss was the crash. Seaton was on a second horse, and she got a bad jump; tangled her forelegs in the fence and came down in a tangle...that piled up curve of neck and rump which is a crashed horse. He went straight out the front and rolled; almost immediately on his feet.

Drama... it's there; and I wasn't set up to get it, because there was a fence between me, and that piece of ground.