Photography is all about light. No light, no picture.

So seeing light is the thing which matters most. I (and lots of photographers) have gotten "lost in the light" as some spectacular (or just interesting, pregant with possibilties) bit of light played across a potential subject.

Light is also how mood is conveyed. The angle, the color/temperature (which is part of the color... and the part a digital camera tries to measure) the amount, all combine to set the "feel" of a picture.

Look at these two portraits of me. The light falling on me is much the same in angle, and in shadow, but the sense of subject is very different (trying to ignore the other differences in subject). 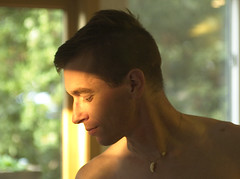 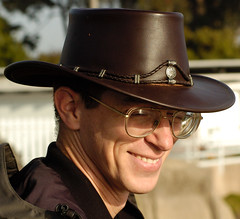 The first seems far more intimate than the second (even ignoring the lack of a shirt). Largely from the lighting. That same pose outdoors, with a tree providing the shade in the mid-afteroon would be a very different picture; even if I were shirtless in it too.

The second is brighter, less intimate; because the light is "harder", an the shadows are crisper.

So, in a large scale, how does that work?

It happens I have a couple of landscapes, both with clouds. 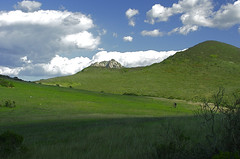 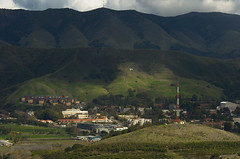 In some ways the light is direcly opposed in them; with the elements reversed. The foreground in the upper photo is defined by the shadow (which provides a countering line to the trail the cyclist is on), and the mountains rise up to the sun.

In the second, the sun lifts the hill in the forground up, out of the murky distance.


They are both pictures with a some sweep, the horizon is a big element in both of them. But the light is different. It's more brooding in the second shot. The darkness in in the background, and seems to rise up to the very clouds. Ten minutes later, and the back of that ridgeling was as bright as the one above it, and the image is, actually, pretty dull. The sense of forboding sits on it, and gives an otherwise busy picture a sense of stillness.

(p.s. I decided that smaller images was probably kinder to those who aren't really interested in the pictures. One may, of course, open them in a new tab/window to see them in more detail. If you want the larger images in the posts, let me know).

For all I've seen/heard, Facebook has moved from interesting, to sort of more trouble than it's worth.

Well, it turns out it's worse than trouble... it's run by a bunch of thieves.

Turns out the ToS gives them absolute rights, now, and in perpetuity to any images which ever so much as rest for a moment on one of their servers.

Rights grabs aren't new. Anytime I consider entering a contest I read the rules; because a lot of them make some fairly demands for usage rights. National Geographic makes a complete claim to use your work, make derivative use of it, in perpetuity, an in any medium now, or yet to be. So no National Geographic contests for me. Yes, I get to keep my copyright, but they get it too, and they get to use it forever, and not a penny to me; barring the longish shot (just based on numbers) that I win.

And if I win, you can bet they'll use it.

When you post User Content to the Site, you authorize and direct us to make such copies thereof as we deem necessary in order to facilitate the posting and storage of the User Content on the Site. By posting User Content to any part of the Site, you automatically grant, and you represent and warrant that you have the right to grant, to the Company an irrevocable, perpetual, non-exclusive, transferable, fully paid, worldwide license (with the right to sublicense) to use, copy, publicly perform, publicly display, reformat, translate, excerpt (in whole or in part) and distribute such User Content for any purpose, commercial, advertising, or otherwise, on or in connection with the Site or the promotion thereof, to prepare derivative works of, or incorporate into other works, such User Content, and to grant and authorize sublicenses of the foregoing. You may remove your User Content from the Site at any time. If you choose to remove your User Content, the license granted above will automatically expire, however you acknowledge that the Company may retain archived copies of your User Content. Facebook does not assert any ownership over your User Content; rather, as between us and you, subject to the rights granted to us in these Terms, you retain full ownership of all of your User Content and any intellectual property rights or other proprietary rights associated with your User Content.

It gets better. If you use an RSS feed to post to Facebook... it gets hosted on the Facebook servers. Facebook reads the feed, and then duplicates the source material on it's servers.
Collapse