So... I made a comment that someone had said (in that teasing way which means they really wished they knew how to do something), "I hate him" when they saw this picture.


Which amused me. Because of all the photos I've got in my flickrstream... that's the one which comes closest to the, "if I had your camera I could do that.". It's a piece of really tricked out macro work. I used a 2x telconverter, and a PB-4 bellows.

The teleconverter was to defeat two of the problems with the set up. The grip on the new pro-series (Nikon makes three lines of camera. Amateur [the Dxx series], Pro-am [the Dxxx series] and and Pro [the Dx] series) cameras prevents the camera from mounting on the bellows, so an extention tube or teleconverter is needed.

Extention (which is what tubes, and bellows do) reduces working distance (and the "macro" settings on lenses is just a camming system, to create some extention in the barrel).

The macro teleconverter I use (a Vivitar)provides some magnification, straight up (with a longer lens, the amount of extention the bellows provides is less [because it's a ratio, shorter lens = higher ratio = greater magnification]) further it allows me to rack the camera back and forth, so I have more fine tuning of the focus.

Knowing how to use all this stuff is a huge part of being able to take photos like that one. It's not all of it; but at least 60 percent.

I'm a decent photographer because I've learned how to use all those gadgets (knowing when to use them is also important, but not as big a deal as one thinks).

The first thing to do when you get a camera... read the manual. You will learn all sorts of things (like the stealth mirror lock-up on the FE2, which is; for those interested in film, probably the best value for dollar camera going. Not the best 35mm out there, but 1/3rd to 1/2 the price of the one I like most, and I wouldn't trade mine for the world, but I digress).

Can you do double exposures (not with a digital, and the effect looks wrong to me when photoshopped)? Is there a Depth of Field preview? Do you have quirky photographic situations which you work with regularly that adjusting hue will fix (a room with a colored cieling can give a color cast. If you use flash it will show up in the higlights, natural light and it will be in the shadows).

Those are the sorts of things the manual tells you how to do.

If you are getting a camera with more bells and whistles than a point and shoot one of the things you want is exposure compensation. Light meters (even the really swell ones in modern cameras) average the light, and large blocks of bright, or dark, can fool them. The trick is to overexpose bright things, and underexpose dark things.

This one, was shot at 2/3rds under, and really should have been at a full-stop. 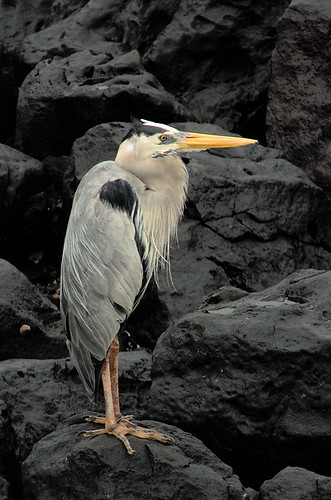 The details in the rocks are a little glossed out (they were wet) and a little less light would have kept them. Much less, and the heron would have been washed out. It's all about compromise.
Collapse