A lot of photography is patience, or perhaps persistence.

commodorified to the Huntington Gardens (I can't think of anyplace better to spend an hour, or a day. It has flowers, statues, artworks, beautiful buildings, amazing books; and exhibitions from the archives. For those who have the time, there is afternoon tea).

While she was making a phone call 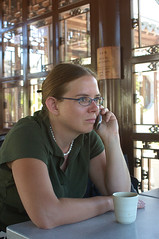 I was shooting photos of the water lilies, which are great subjects at this time of year because they are in all stages of development, from budding, to empty seed pods.

A lot of the shots were crap, mostly because the stalks are really vertical, which makes for a boring photo.

Some were ok, because something exciting happened to make the static less evident. 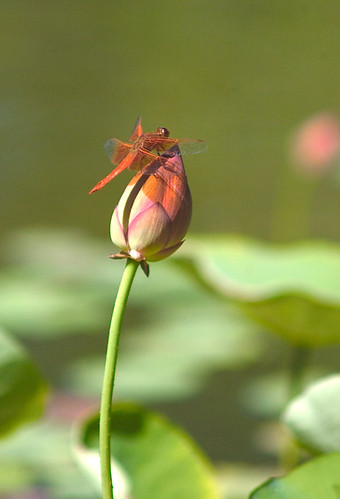 Mind you, the curve of the bud-stalk was also not purely vertical.

And sometimes, the image in the viewfinder is so much less than it turns out to be on the screen. 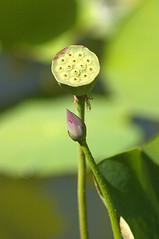 The immature seed pod would be dead dull, but the line of the bud makes up for that, and the sense of time compressed (much as a parent and child) adds a lot more.

I got that shot because I was willing to expose a lot of frames, a combination of experience, eye, bloody-minded determination (the light was funny, and the need for a polarizer meant I was at iffy shutter speeds) and a willingness to accept that I might be wasting this set of exposures; as practice. A small bit of serendipity (the bud breaking the static line of the seed head) and I got something presently useful from it too.

I do a lot of close up work. If one is going to talk about the "essence" of photography, a lot of it has to do with distillation, reducing the image to the very kernel of what the photographer sees.

One of the things the shooter does is exclude everything extraneous; the term of art is, "gardening". It can be something as gross as moving fifteen feet to get a tree out of the landscape, or as small as pressing down a single blade of grass.

Back when I shot nothing but film, I used the camera to do a lot of my gardening. Enlarging the image loses detail, so by composing to the edge of the frame I didn't have to worry about losing detail in the crop (this is part of why I really love my F3).

There some things which get more dominant as one closes in; the two which are most evident (at least as I see things) are color, and texture. 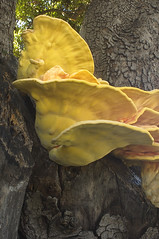 Which has shape, and context and contrast between the tree, the fungus (a tree ear) and the leaves/sky.

Zoom in and it's all about the color yellow. 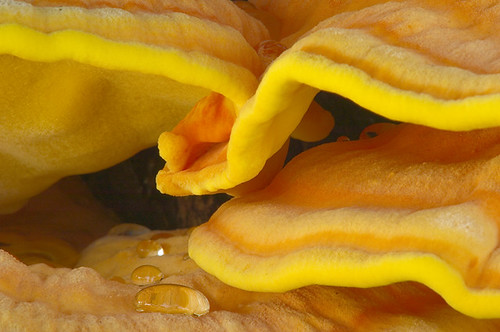 The gleam of the water droplets is nice, but the picutre is really about the color, and the fuzzy surface.
Collapse