commodorified at the beginning of the month. For those who are interested in Pelicans, I've put a lot of them up on my flickr stream.

The most interesting exploring was when

trolleypup came down from SF and the three of us noodled about the back roads and wandered about the coast. I dragged them (with

trolleypup doing yeoman's work at hauling my tripod about for much of the day, when

commodorified wasn't carrying it. It's nice to not be hauling even more stuff than the 30 .lbs of camera gear which lives in the bag) out to the backside of Morro Bay, near the northeastern edge of Montana de Oro.

I was planning to walk out the dunes, onto the spit which makes up the far side of Morro Bay, but it was not to be. From April to Oct. it's closed so the Snowy Plover can nest. So we made our way back along the marge of the bay, just shy of the muck which is the intertidal zone.

It's a pleasant enough walk. The only problem is the low-lying poison oak. Since

commodorified's luggage had taken a side trip, she was in sandals and shorts. I was in sandals too, but the trails are pretty easy to walk, and when they get close, one can see the poison oak, so we weren't too worried, esp. as once one gets to the water, the poison oak is much abated.

As we meandered back we saw pelicans, some songbirds, and a member of the, all too common, "bastard egret", so called because every time one gets close enough to set up the tripod and ponder a really long shot, the bastard flies another 100 years away. I carried the tripod for about 400 yards before I gave up on the him.

So we made our way, which is when

commodorified yelped, and levitated some four-five feet to her left.

She had, it seems, placed her foot next to a rattlesnake.

trolleypup, and I, thought it might be dead. It hadn't reacted to her foot, and wasn't moving as we looked at it. So I took some brush, and well out of range (snakes can strike about 1/3rd body length, and they have to be coiled. This one wasn't, and I was 4 feet behind it; safe as houses) tossed it.

Bam! One coiled snake, with that, oh; so distinctive, buzz. 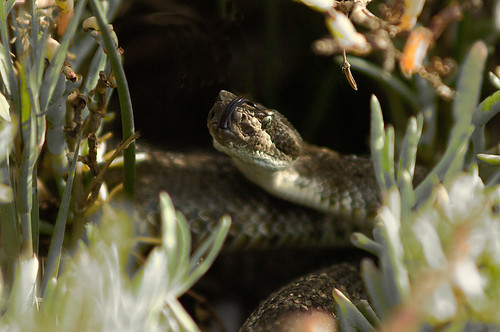 You can see it larger by clicking through. It was a fair-sized snake, six-buttons, and about 2 feet long. Marna handled it really well. Given the circumstance (no protective footwear, exposed legs, very close; and quiescent snake) she had the right reaction. Had it been buzzing, the thing to do would have been to freeze, spot the snake, and move away.

We got done looking at the snake (which was really pretty), and saw another egret. This one was not of the bastard subspecies.

Here it is, taking off. 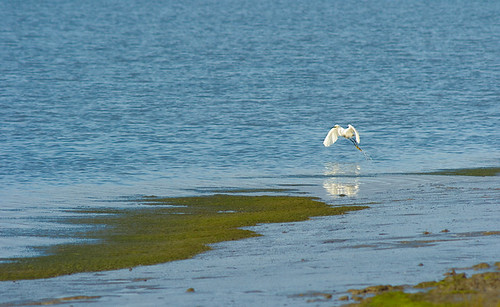 So we had a good day, followed with a splendid supper at Guiseppes, in SLO.
Collapse