I seem to have failed in part of my post on my PTSDish problems.

I wasn't trying to say I thought I was weak, per se, for having been affected by those things. I was trying to address why one might decide not to seek help. There is a comment in Robertson Davies The Rebel Angels that one ought not attempt therapy when one is smarter than the therapist.

This is only half-true; but if one is smarter (or at least more clever) than the therapist, untoward (even if, at the time, desireable) results can happen.

I saw a Shrink when I first got to Madigan. They made me (I gave truthful answers to the, really vague, questions on my mental state... so they sent me for a consult). Anyone just back from theater; who was honest, should have gotten such a consult. A better system wouldn't have done consults, but rather some form of support group.

Suffice it to say that I, not stupid; occaisionally clever, and trained as I was, bufalloed him somthing silly. I went in with the intent of getting a specific diagnoses,and I did (Fundamentally stable, dealing well with the, understandable, concerns and uncertainties facing him).

Am I "weak,"? No more so than anyone else who sees the sorts of things I'm seeing. I was mocking (or trying to) the cultural perceptions which make it hard to think those hardships might cause one to need help.

commodorified hit it on the head when she linked to Kipling's Hymn of Breaking Strain:

We only of Creation
(0h, luckier bridge and rail)
Abide the twin damnation-
To fail and know we fail.
Yet we - by which sole token
We know we once were Gods-
Take shame in being broken
However great the odds-
The burden of the Odds.

Thanks, btw, for all the support. It helps.

Yesterday I took the car to get the oil changed. Our mechanic is close to the house, so I dropped it off and walked home. As is my wont I had the camera bag with me. On the way down I saw a splendidly decorated yard (Hallowe'en is coming).

It was simple, a huge ghostly figure; with a ghastly skull, was rising from the plants in the yard. It's at least 20 feet tall. 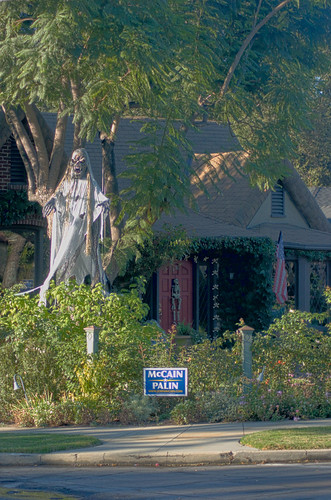